"Chess openings are like science. It keeps evolving. Judging by the standards of the time when Garry was an active player, he indeed knew the opening extremely well. Now it is over, his preparation isn’t good anymore. It is part of the past. Chess is developing very rapidly – just like the Internet, gadgets. You know, no one cares about the first models of iPhones now. Without day-by-day opening studies it is not possible. You can’t just invent a bunch of ideas and then spend ten years capitalizing on them. In the 70s or 80s this might have been possible. Now, in the computer age, you have to keep finding more and more new ideas. This is a paramount amount of work. You can’t rely on the old databases. I can see that Anand and his team are constantly working on his openings and refreshing his repertoire. I mean not cosmetic changes, but entirely new approaches. This hard work builds up over the years and offers its own benefits. Hence, I think that it will be very hard for Magnus to catch up, because even if he starts working 24/7, then in just half a year he still won’t be able to build up as much opening muscles as Anand has established over the past decade. He might come up with something sly though. Remember, when I played a match against Kasparov, I realized that he will be prepared better in the opening than myself, but I managed to present a new word in opening theory and somehow level our chances in the opening." 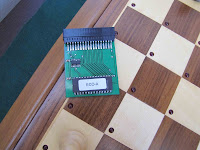