1979
In 1979, prices dropped to the $100 range. Machines such as the Fidelity Chess Challenger 7 and Applied Concepts Boris Diplomat were released with no real strength improvement. The next playing strength sophisticasion came with the Fidelity Voice Chess Challenger. The rating went up about the same as the price (200 points). Gimmicks such as the voice, or machines with little, snide messages running across a screen, were meant to uplift an otherwise unchallenging game. These “innovations’ were a questionable use of the added memory space, which could have been devoted to a more challenging level of play or at the very least an improvement on move entry technique. Moves still had to be entered on an external keyboard, leaving much room for error and “illegal” moves. Additionally, it was still possible to enter the moves correctly on the keyboard yet position pieces incorrectly on the playing board.

1980
In 1980, Fidelity came out with the first sensory touch board, the Sensory Chess Challenger 8. Now moves could be entered directly on the board by pressing the piece to be moved first on its starting square and then on its destination square. The board, however, required a concentrated, firm pressure on a precise point; nevertheless, this technology was far superior to the external keyboard method of entering coordinates, eliminating the possibilities of keying errors or move errors discussed above. Additionally, it went a long way toward eliminating “illegalities” in moves. The price dropped back to the $100 range, while playing strength advanced to slightly over 1200.

The novelty of having a machine that simply “made legal moves” wore off quickly, and designers now began developing strategy on a higher level, incorporating time controls and enhancing combinational considerations by the machines. These “toys” were good gift giving items for beginners, But even non-tournament players found themselves straining for a good game by giving these computers several hours per move (?!). Most players were still
disappointed with the weak responses. 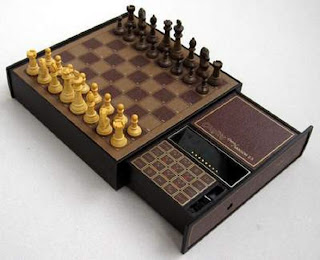 The Spracklens, top programmers of the time, began concentrating on serious program advancement with their Applied Concepts/Chafitz Boris/Sargon 2.5 program. Chafitz marketed Boris/Sargon 2.5 as the first serious ‘tournament players’ computer in the form of the then conventional key-punch system, calling it the Modular Game System. The system could be up-dated with additional insertable modules. Chafitz also marketed a fancier version of its system (a state-of-the-art program in updatable format) called the Auto-Response Board. This beautiful wooden board, still available, incorporated magnetic reed relay switches below each square.
There were magnets in each piece, which responded to the magnets at the squares. Of all the machines of its time, the Auto-Response most simulated play with a human, sinds all that was required was to move the piece (no pressing squares) and the magnets recorded the moves. At $800, the machine was by far the most costly of its time. As a 1400-1500 rating, both machines played Class C chess. A less powerful program, the Sargon 2.0 was made available
for Apple Computer owners. The 2.0 was a less challenging opponent, both because is was an inherently weaker program and because is was software intended for a general computer rather than a dedicated system.


1981
Fidelity started the year with their Voice Sensory Challenger in an attempt to compete with thc top of the line machines. The machine, which integrated voice and sensory technology and included a built-in chess clock, was contained in a plastic casing surrounded by a wooden framed. The price ranged between $300 and $400. However, even with the additional features, tournament players still preferred the Chafitz’s Modular Game System for playing
strength and updatability. 1981 proved to be a year of many changes for computer chess.
Chafitz discontinued marketing and distributing their two chess computers. Thus, the two manufacturers, Applied Concepts (Modular Game System), and AVE Micro Systems (Auto-Response Board) started marketing the machines on their own. However, in
the confusion of the break-up, the top programmers, the Spracklens, ended up working for the largest manufacturer, Fidelity. It is important to note that, at least for marketing to tournament players, the programmer is the most important element, even for some multi-million dollar companies. Today’s battle is really between which individual programmer will refine and enhance his program to the best possible playing strength and variety. 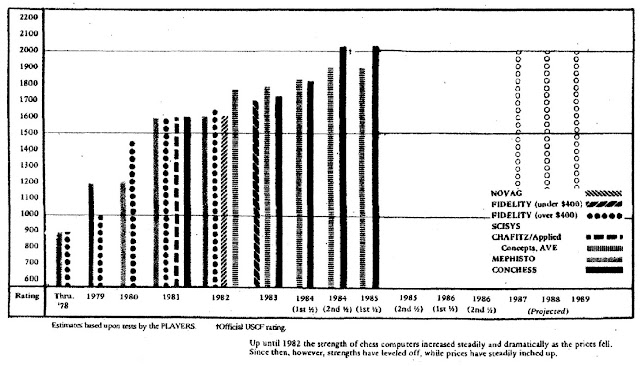 Fidelity’s main sales were of lower-end products until Dan and Kathy Spracklen joined their team. They brought improvements in programming which virtually assured Fidelity’s top position. Applied Concepts was also improving the quality of the product, with the Morphy Edition master chess, which was a few points stronger because of middlegame improvements. Morphy Edition master chess increased the strength of the Boris/Sargon 2.5 to an approximate playing level of high 1500. Morphy Edition master chess was available for about $100 as a program up-date, which was a pleasant boost for owners of the Modular Game System. Additionally, they changed the name from Modular Game System (MGS) to the Great Game Machine (GGM).

Also in 1981 another pioneer programmer was busy working for Novag. This slick company made its first strong appearance in America in 1981 with David Kittinger’s “My Chess” program. Introduced in their Novag Savant machine, a hi-tech, touch sensitive LCD board with a rating of approximately 1500 and a retail price of $625, the program ranked close to the top but was relatively inaccessible because of price. 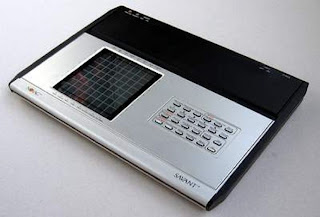 The same was true of Novag’s Robot Adversary, which was an elegant machine priced at approximately $1500 (about $1.00 per rating point). Both of these machines were ahead of their time cosmetically, winning the prestigious New Product Award. However, the price/skill ratio was less appealing.

Novag also introduced a weaker, smaller “My Chess” program (only 4K) in a hand-held machine called Micro Chess. Priced as $140 with a rating of approximately 1000, this was the only significant hand-held chess computer of its time. Kittinger had just moved from Alaska to Los Angeles to continue his programming while making use of additional input from strong masters. The Hong Kong based SciSys also made an appearance in December of
1981 with their Chess Champion Mark V. Programmer David Levy’s best effort won the 1981 ‘World Micro Championship, Commercial Section. To wrap up this significant, year - all the companies top-of-the-line programs were nose to nose at a high Class C, nearly 1600.
This included Fidelity’s last quarter advancement after the addition of the Spracklen team. During those few months, Fidelity added approxiamtely 200 points to its best machine to meet the competition with their Champion Sensory Chess Challenger program.

The final 1981 retail price standings, with all machines rating at approximately a high “C” level, were: Fidelity Champion Sensory Chess Challenger $375; Applied Concepts Great Game Machine (MGS/GGM) with Morphy Edition master chess $350; SciSys Chess Champion Mark V $398; Novag Savant $625.
At this point, all the machines were straining to become a solid Class B strength. However, although all manufactuers are now familiar with actual ratings, most of them were claiming “unofficial” ratings of 1700-1799. Things had gotten to the point where if any manufacturer claimed thereal strength of their machine, which would have realistically been under 1600, themachine would have appeared to be weaker than any of the competition and therefore unmarketable.