The main real advantage to getting the strongest program for someone at that level is that although he or the never plans on getting to the point of bearing the machine regularly on its higher levels, as least the machine will be providing a better game on fast response levels. In addition to receiving a more challenging game without having to wait, also the stronger the machine, the less likely the chance of outgrowing it. Naturally, if one is using the machine as a tutor, one inclined to take the advice of a stronger program with less of a grain of salt than a lesser program. The machines are so strong now, however, that most people can start to make compromisses between top strength and top looks. Still some players wanted the beauty and a program ranking closer with the top models. Shortly after Novag released their Super Constellation, Fidelity released a third version of the Elite A/S. The program is exactly that of the Elegance’s, However, is runs 0.4 megahertz faster (3.6 versus 4.0 Mhz), resulting in only perhaps a 10 rating-point gain. This program at
4.0 Mhz is 50 to 100 points stronger than the older Elite A/S Budapest, putting it close to 1900. So the dilemma was solved with the Elite A/S 4.0 ranking solidly in the top two. The cost went up only $50 ($650 list), a healthy price/strength raise.

With a list price close to the Super’s, the comparison is easy-expensive, handsome cosmetics (beauty) versus costly electronics/programming (skill).
Elegance vs Elite A/S 4.0


With a difference of $250 in price, the Elite/Elegance comparison is a little muddled.
1) Playing strength is approximately equal, both as solid class
2) Playing surface of Elite 4.0 is almost tournament size, with beautiful wooden pieces, making for much more comfortable, natural playing.
3) Both machines have a modest number of built-in opening moves (several thousand) intended to be supplemented with any of Fidelity’s opening cartridges, such as the CB9 ($78 list) with 8,160 moves or the CB16 ($120 list), with 16,100 moves. (The Chess Challenger 9, incidentally, will only accept these two). The newer Fidelity models (such as the older Prestige Challenger, all three Elite A/S’s, the Sensory 12 and Elegance) will all accept these two general opening cartridges and the more specialized ones.
Also offered is the 5-volume ECO (Encyclopedia of Chess Openings) set (each volume, $120 list) or the even more specialized Queen’s Gambit Tarrasch module ($120 list).
4) Unlike the Elegance, the Elite 4.0 has a built-in displayed chess clock. Besides the obvious telling of time, one can see a number of insights the machine is trying to relay. 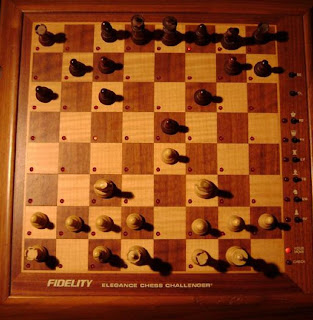 For instance, it will display its assessment of the position in + or - fractions of points (+ 0.5 means it feels it is up the equivalent of half a pawn as a positional/material equation. It does, occasionally, display minus scores - this is to make the human opponent feel better). The clock will also display which ECO opening module should be popped in next, in the event that a line should cross over to a different ECO volume (a rare occasion, and only useful if one owns the ECO cartridge set, $600 list).
5) The Elite 4.0 has a long-term memory (as the Super Constellation),whereas the Elegance is only short term.
6) The one advantage of the Elegance is that is has no voice. But rest assured, the voice on the Elite A/S can be turned off. Actually, the voice may have a positive influence in stimulating the interest of a youngster to tackle the game.

All rating estimates given so far have been based on the machines performance without utilizing any opening enhancements. The following comparison of these enhancements is primarily between Fidelity’s complete set of ECO cartridges and Novag’s programmable opening book and how they relate to the two primary aims of the opening ‘book” of a chess computer:
1) to play these automatic moves quicker and
2) to create more difficult middlegame opposition.
We as Players feel that, in general, the opening is the least important phase of the game. One of the primary reasons for increasing one’s depth of rote knowledge of an opening repertoire
is that is simply allows one to budget extra time to more signifiant middlegame and endgame considerations. The set of ECO cartridges for the Fidelity machine override the much smaller,
built-in lines and increase the average depth of many lines to over 10 moves, setting the machine in motion for a decent middlegame.
The set is especially good for beginners as they can see if the moves they are making are respectable enough to be considered a main line (the cartridges contain only the main ECO lines). However, the entire set probably increases the overal strength of the machine by only
25 points. Additionally, while ECO may assess a line as being slightly better for White, equal, etc. these assessments do not have the same meaning for every player. “Good” and “Bad” positions are relative terms.
More important than speeding up the opening with a vast collection of opening moves to reach relatively even positions is to have the moves continue into the middlegame with significant effect. Thus, the ECO set for Fidelity is less effective than Novag’s programmable opening (more appropriately titled programmable middlegame) feature, since the Novag approach may be used to specifically affect only the middlegames in which the user needs
practice. This approach has great significance for the serious student. Imagine that every game played resulted in a middlegame where you found yourself having to struggle, not just any randomly selected middlegame, but specificalty the ones that occur in
your opening repertoire. Every player finds that there are lines within his or her repertoire that cause more difficulty than others. One lessen to be learned with a programmable middlegame is how to steer the opponent away from these more difficult lines when thev are encountered in tournament play.
If this is not possible, using the computer the player is able to learn how to counter and/or handle these difficult middlegame positions through regular practice. Let us continue this example in greater detail. Imagine, if you will, the average master playing against an expert. If the expert is playing an opening where the middlegame plays itself (e.g, a thematic kingside attack) and the master bas been steered into his least favorite line, suddenly the expert is playing at least 100-200 points stronger than his usual play.
Similarly, if a 2200 rated player was playing the 2000 rated Super Constellation and programmed in to enter only middlegames he despised playing, then the strength of the computer goes up in like manner. Of course, the next player with his own repertoire who sits
down to play the machine will find its strength back to the original, because the machine is only stronger specifically against the person who programmed it. With the Super Constellation this is achieved by first changing the ratio of rcsponse of the 21,000 moves it comes with. Undoubtedly some of the machine’s lines will provide you with difficult middlegames to play against with either color, After you select the cream of the crop, the most difficult lines the machine has against you, specifically (probably a total of several
hundred or more, depending en how varied your opening repertoire is), then you add other lines of your choice which are designed to pose you with difficulties. This process of aiding the enemy works like an inoculation. Thus, curiously enough, the 2400 programmable half moves of the Super Constellation are more significant than the tens of thousands of ECO moves contained in the Fidelity cartridges on both of the opening qualities discussed earlier:1) the game generally goes deeper into the middlegame, gaining time for later analysis and 2) the middlegame opposition is tougher.
To conclude: The Fidelity ECO system is good for the intermediate player to help widen his or her opening repertoire. For the, beginner or intermediate player who purchases the Super Constellation, the assumption is that the student will learn from the built-in book lines and from a library of actual books. The student has probably set his sights On reaching expert or master rating and will find the machine with its own book challenging to that point. When he reaches his goal (or perhaps even at Class A) the owner can then take the time to boost the machine’s strength with the programmable option (also by that time there will probably be slight up-date on the overall strength of the machine).
Postado por tradechess às 19:20:00