Since their inception in 1976, commercial chess playing machines have consistently improved in playing strength, reliability, appearance, ease of operation and price. The main point of discussion in this article will be the price to rating strength ratio of machines on the market.
The latest crop of these machines offers one entering the Expert class, two of solid class “A” strength, with two others bordering on low class “A”. Curiously, the rating of a computer is not as stable as one might expect. It fluctuates more so than the average human due to two factors:

1) whether the opponent is basically a strategic or tactical player (and other more subtle “playing style” considerations),

2) how used the opponent is to playing against computers and more specifically, against the computer at hand

The human who has been playing regularly against different machines can probably count on a new machine playing about 100 points below its “real’’ rating against him. And after playing a lot of games specifically against the new machine he can possibly substract 50 points, once he gets to know it. It’s no wonder the top computer out now, the Novag Super Constellation (officially rated 2018), which regularly beats experts, only seems to a computer vet to be in the 1900’s. Granted it is a strong expert at speed chess. In order to understand where chess computers currently stand, however, one must have a sense of the history of the development of chess microcomputers. 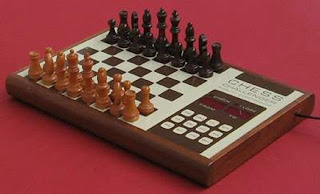 
The first chess computers appeared in the late 1970s. These included the Fidelity Chess Challenger 1 and Fidelity Chess Challenger 3, as well as Applied Concepts Boris (a small
wooden model). The mere fact that these toys could “think” was a novelty which caught on quickly with the general public. However, with ratings of below 1000 these early computers were less than challenging and therefore of little interest to the tournament player.

When manufacturers claimed various rating strengths for these machines, i.e. beginner, intermediate and expert levels, they were demonstrating ignorance of the meaning of ‘expert” rather than any attempt to deceive the chess playing world. In fact, the most primitive of these machines would not capture en passant, castle or promote properly. One machine, now classic, had the alphanumeric system backwards, with letters for the ranks and numbers for
the files. Nonetheless, these primitive patzer machines, which sold for under $400, were a good beginning for what has become an exciting and challenging application of computer technology to the high logic of chess. Most of the available machines were manufactured by Fidelity and Applied Concepts.

Two companies, Tryom with the Electronic Chess and DataCash Systems/Staid with the CompuChess (started up solely for the purpose of making chess computers (although Tryom also produced a backgammon model); however, they could not keep pace and quickly dropped out of competition when Fidelity came out with their Chess Challenger 10 which ranked over the 1000 rating. 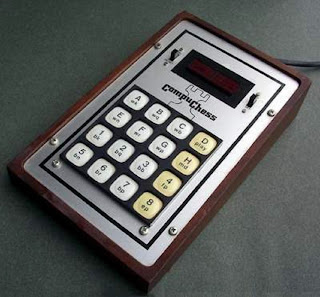